Simone Tarrone is the art name of a new Italian writer who has already published three very different works: a book of humorous short stories entitled "Li Mejo Autibus"; a psychological novel entitled "Il Sogno e il Gelo" and the last born, an historical/archaeological novel entitled "Sotto il segno di Hercle". A writer who looks forward to be read by all kinds, types and ages of readers. His style is clear, fast and incisive. Brought to introspection and reflection, he can be considered classical in his way of writing and passionate in his feelings. He aspires to describe the biodiversity of humanity  through a multiplicity of points of view that bring out the different faces of truth. Human behavior is examined under a magnifying glass that amplifies the daily ritual and highlights the astonishing multiplicity of characters in their perpetual struggle and reconciliation. Not surprisingly, reading TARRONE, we realize how the banal and the everyday life often hide reasons of interest, discovery and amazing curiosity. The other focal point of his writing is introspection: the consideration of the internal causes that drive us to act and the reasons that triggered them. The discovery of ourselves and of our roots is the main key to reading his books.


You can buy his books online on the main book sales portals, by entering the name of the author or the title of the book in the specific search boxes.

SIMONE TARRONE was born in Italy in the late 1950s. He has always lived in Rome, he had a happy childhood, even if he was precocoiusly responsiblised  by the disappearance of his father.

Induced by his mother, teacher of literature, to love books, he completed classical studies and graduated with full marks in a course on demo-ethno-anthropological subjects. He chose this address because, finding it difficult to bear the other people, he wanted to study them with curiosity and thoroughness, from primitive populations to the different contemporary social strata, to understand the reasons for his dislike (but he has not yet succeeded!).

His working career took place first as researcher in a research institute where he carried out all kinds of tasks (from researcher to secretary, from skilled worker to project developper) and then as expert project designer in an agency of the Lazio Region, where he had the pleasure of being able to closely study the wonderful fauna of the officials and managers who preside over it. In the course of his work he has written hundreds of reports, projects and technical surveys  in various sectors, which once printed could fill a room, but they where not be able to achieve anything  and will never be used for anything.

He is currently working as volunteer with satisfaction in the conservation of cultural heritage.

He loves the sea and the natural landscape and in both he prefers to immerse himself in perpetual exploration without the help of advanced technologies, but as a modest swimmer and walker.

He loves books which he considers the only way out in times of crisis.

He loves eating and drinking, but preferably foods that are good for him.

He loves to live, with curiosity and to dream. 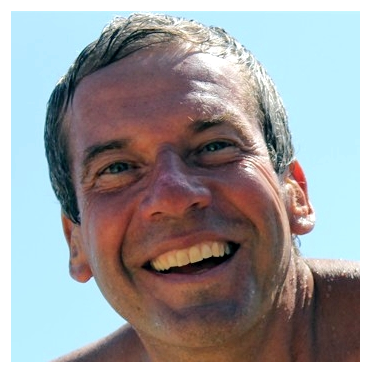